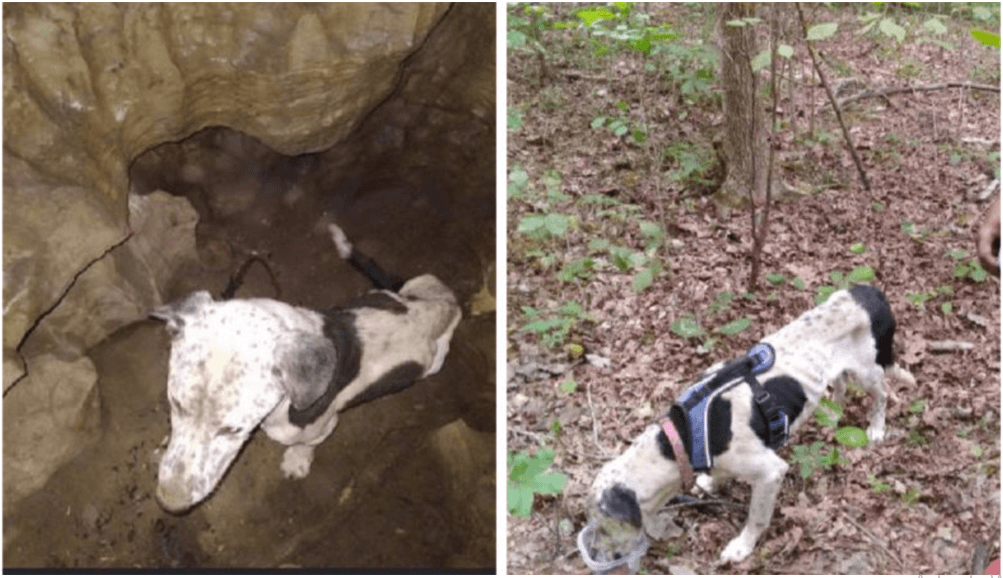 Sometimes dogs get themselves stuck in some pretty difficult places, and need a little human help getting free.

Like one dog, who earlier this month fell down a 30-foot cave — and thankfully, a group of bystanders happened to find him in time and saved the day.

On September 4, a group of cave explorers were at Dewey Hickman Nature Preserve in Indiana, when they saw an unexpected sight: a dog was trapped at the bottom of a cave, 30 feet down.

According to Harrison County Animal Control, there were scratch marks down the shaft, and it’s likely the dog got its collar stuck on a branch on the way down, ending up at the bottom after wiggling free.

The dog was also very thin, and appeared to have been down there for about two weeks. He had likely been surviving off the rainwater collected in an empty turtle shell at the bottom of the cave.

Thankfully, his nightmare was finally over: when the explorers saw the dog, they rappelled down to get him.

The cavers named their new friend Dewey, and the dog was very grateful for their help.

“When Hawkeye came out of the cave, he was very emaciated,” April Breeden of Harrison County Animal Control told The Dodo. “Once they were in the cave with him and once he got out as well, he was very gentle.”

“They originally repelled down to check it out and came back up. He started barking like, ‘Don’t leave me.’”

After being rescued, the emaciated dog was taken to Harrison County Animal Control.

Thankfully, “Dewey” soon made it home: on September 6, animal control announced that they had found the dog’s owner. “His name is actually Hawkeye,” they wrote. They also thanked everyone who shared the story: Hawkeye’s family reportedly got in touch after seeing their dog on the news.

On September 7, Hawkeye finally was reunited with his family, a happy ending to his scary ordeal: “When he saw his dad, he was so excited, jumping and kissing him,” Breeden told The Dodo.

We’re so glad Hawkeye is home. It’s a miracle these cave explorers found him, and we’re so glad they saved him and helped him reunite with his family. 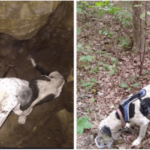