Some highway patrol officers in Brazil had just completed a routine traffic operation when they returned to the vehicle to see someone who needed help. And it was an abandoned dog who apparently knew where to go for some assistance! The pup had jumped into the patrol car and waited for their return. 🙂

“They were surprised,” officials wrote on Facebook, as translated. “He cried a lot. [He] appeared to have been abandoned on the side of the highway.”

The patrolmen were stunned by this smart dog’s plea for help, and they proceeded to give him a lift back to the station. And it was there that Rex’s life would take a change for the better; one of the officers there decided to adopt the pup!

“[He] decided to adopt him, which made his children happy,” the officials continued. “His name is Rex!” 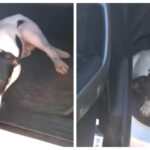