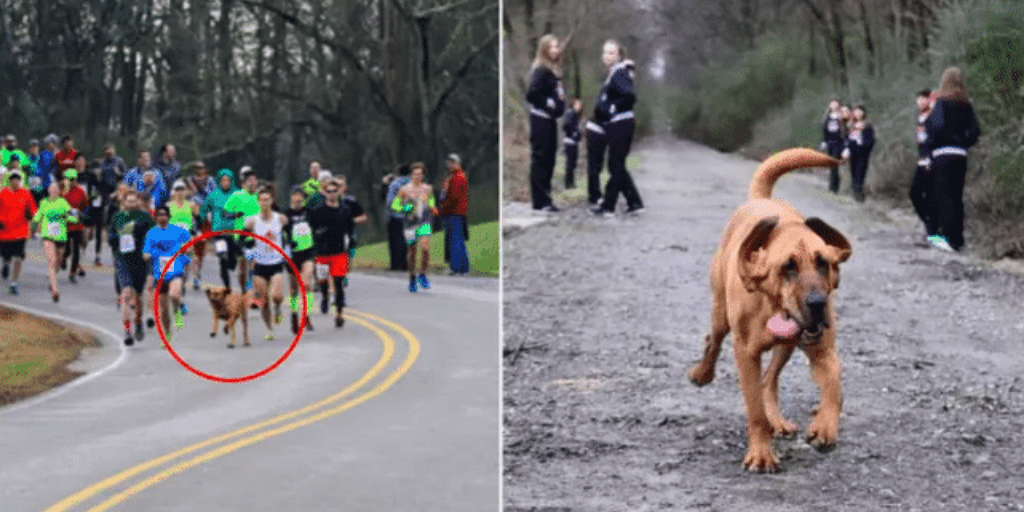 Ludivine the hound dog hadn’t exactly trained to run a half-marathon in her hometown of Elkmont, Alabama, but when she saw a crowd of jubilant joggers, she couldn’t help but join in the fun!

Owner April Hamlin let her hound out to potty, like she did every day. Ludivine, ever the social butterfly, is well known around her small town (population: around 400) and often wanders about greeting neighbors.

But on the day of the Elkmont Half-Marathon, the happy hound must have picked up on the excitement of the race! As she watched the runners take off from the start line, Ludivine ran right alongside them, completing the entire 13.1 mile race, and coming in at an impressive seventh place!

She kept close place with runner Jim Clemens, 48, who placed fourth in the race with a time of 1:23:15. “Every time I thought she had dropped off to go back home, I would hear her coming back up to me, and she would race past me up to the two leaders…She would run off to romp through streams and into yards to sniff around for a while,” said Clemens in an article by Runner’s World.

The trotting pup even earned herself her very own medal, completing the race in 1:32:56. Image how well she would’ve done if she hadn’t gotten sidetracked!

Before that day, owner Hamlin had no idea that her pooch was capable of such a feat, finding out about the accomplishment after she received pictures and texts from friends who were at the race. “She’s laid back and friendly, so I can’t believe she ran the whole half marathon because she’s actually really lazy,”said Hamlin in the Runner’s World article.

Hamlin said that the attention Ludivine has brought to the race has actually helped a greater cause. “It’s the first half-marathon in Elkmont, and the people who started it are parents of the kids who run cross country…They wanted to try and fundraise because our school system doesn’t have a ton of money for cross country. Because of this dog, they are getting so much publicity, and I think that’s the best part,” said the hound’s owner in the aforementioned article.