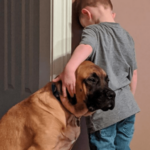 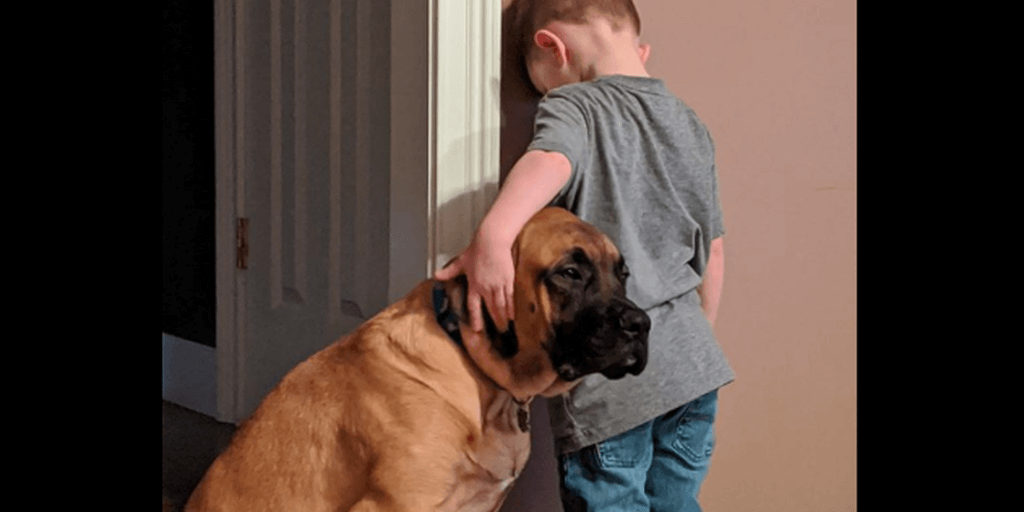 A loyal friend is someone who sticks by you no matter what. While loyalty is a quality that we sometimes struggle to find in people, loyalty is never difficult to find among dogs. There is a reason they’re referred to as a “man’s best friend.” A dog will be loyal to their person under any given circumstance – even a time out. 3-year-old Peyton and his dog, Dash, are perfect examples of this.

Jillian Marie Smith, Peyton’s mom, caught him fighting with his 3-year-old sister. Knowing she had to discipline her child, she gave Peyton two punishment choices: go to his room or go on time out.

Instead of going to his room, Peyton chose a time out. Jillian then sent him to the usual time out spot, where he faced the wall and took his punishment.

But Peyton wasn’t alone long. His loyal English mastiff, Dash, soon joined him. In a show of solidarity, the giant dog quietly sat beside Peyton and joined him in a time out.

The moment was just too cute, and Jillian had to sneak a picture of the two friends.

She posted the picture to her Facebook and commented, “When you’re in time out but your best pal won’t let you serve your time alone.”

That is loyalty at its finest.

The picture of Peyton in time out with his bestie Dash soon went viral and was shared more than 43,000 times. Even though Peyton had to do a time out, Jillian admitted that as a mom, it’s impossible to stay mad at your child for long.

As she explained to The Dodo, “I couldn’t be mad long because it was just so cute how Peyton wrapped his arm around Dash. When Peyton had to go to time-out, I think Dash knew he needed his buddy.”

This isn’t the only time that Dash has been a point of positivity for the family. As Jillian has said, he’s a big reason that their family is so happy.

As Jillian revealed, “Dash has made life happier for the whole family. Most of all, for Peyton. If you ask Peyton, Dash is his buddy.”

Of course, the time out didn’t last forever, and soon Peyton was free to play with Dash. The two have an incredibly close relationship that consists of the two of them playing, cuddling, and just spending time together.

There is no doubt that these two will be best friends forever since no friend is more loyal than a dog.